The Commemorative Monument of Peace and Unity in Davao City, Philippines.

Peacebuilding organizations like OEF face a surprising problem: deciding what we mean by peace. While almost everybody has an intuitive idea of what peace means, the reality is that nailing down a concrete definition becomes slippery fairly quickly. Peace researchers and organizations like the UN have spent a significant amount of time debating how exactly to understand peace, because doing so is a necessary step in coming up with a strategic plan about how to support peace. Some of the ideas that these discussions have generated include the famous distinction used by Dr. Martin Luther King, Jr.  between a “negative peace” characterized by an absence of direct violence and a “positive peace” characterized by social systems that support human flourishing in all areas, and the UN’s development of “human security” as a way of thinking about all the issues that lead to deaths beyond just military violence.

A Working Definition of “Peace”

This isn’t just a philosophical discussion. In order to do our work, OEF and other peacebuilding organizations would benefit from a clear working definition of what we mean by peace. OEF’s answer to that is that we exist to prevent large-scale organized political violence, and we define our goal as the elimination of war and armed violence as well as the prevention of its recurrence. In the technical language of peace theory, OEF is oriented towards a “negative peace,” because we define our goal as the absence of violence rather than the presence of larger social systems. That’s in itself a big enough goal for one organization (and while admittedly ambitious, it’s a perfectly plausible one). So in developing our theories of impact and articulating how we do our work, we start with that as our end goal: the elimination of war and large-scale organized political violence.

Historically, famine and disease have killed many more people during war and rebellions than direct combat itself. However, a key part of OEF’s thinking about impact is that we must define our goals narrowly in order to be able to solve them. A positive peace framing, while valid, is so expansive that it opens the door to defining our work as addressing almost every social problem everywhere. We needed a way to draw a circle around our work and define what is in the mission and what isn’t, and so we have centered our work on a negative peace definition.

This doesn’t mean that we don’t consider the arguments made for the broader definitions of peace. The problem with a too-simplistic negative peace approach is that the research on war is clear: war is always multi-causal. While the dynamics of intra-state violence, inter-state war, and internationalized conflicts are different there are underlying patterns which repeat. In particular, violence is risky and dangerous and, more often than not, in times where people are able to choose peace, they do indeed choose it. While wars can be caused by issues or failures in many different areas, peace is always the result of multiple pressures working together to reduce people’s willingness to fight and promote their faith in other ways of resolving disputes or achieving political goals. At the sub-state level, these include effective economic development, good governance (including legitimate, inclusive, and accountable systems), and good social service delivery. 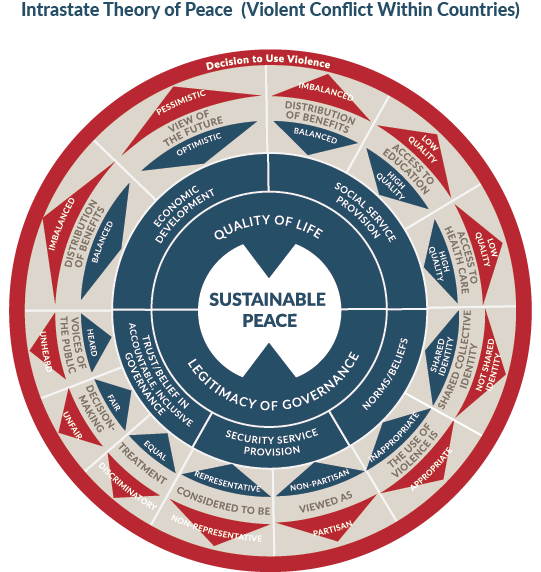 At the inter-state level, democratic and accountable governments, trade, and engagement in international institutions all support peace, and for the increasingly visible cases of internationalized conflict there are correspondingly hybrid dynamics of sub-state conflicts and international engagement. What this means is that even taking a negative peace definition, OEF and organizations like us who want to follow an evidence-based approach to peacebuilding must think about more than just stopping violence. Instead, peace requires effective delivery of economic development, good governance, state capacity for effective work, inclusive service provision, legitimate security services, and international engagement. This sounds like a positive peace approach, but the key difference is that we don’t see the absence of these issues as necessarily violence by our definition… Instead, we see the absence of these elements as dangerous indicators that violence is possible.

Achieving this is a tall order. But it’s what peace requires and increasingly organizations are acknowledging this: the US’s new “Global Fragility Act” is directly an attempt by the US government to grapple with this reality, and the UN’s Sustainable Development Goals explicitly link issues of peace to issues of good governance and development. So OEF’s approach to peacebuilding starts with the recognition that achieving the negative peace we’re looking for means working to set up systems that work across issues of development, state capacity, and good governance to ensure sustainable systems for peace.

Our programs are designed both to address specific identifiable issues that are contributing to conflict in a society and also to help position OEF to catalyze and support the larger networks of organizations working together across all of these different issues to deliver peace in the places where we work. In the future in PeaceWire we’ll dig a little deeper into how OEF sees the different drivers of conflict are in the different cases of violence within and between countries and internationalized violence, and what this suggests for how we approach questions of coordination.