Africa is considered the fastest growing cell phone market globally, with cell phone related commerce accounting for 7.7 percent of GDP and 3.5 million jobs in 2016. Cell phone market penetration in Sub-Saharan Africa, already at 43 percent, is expected to grow on average by 6.1 percent per year to 2020 – 50 percent higher than the global average.  By 2020 there will be over one billion SIM connections, half a billion smartphone and half a billion broadband connections in Sub-Saharan Africa.

From facilitating commerce through innovative mobile banking applications and poverty reduction initiatives, cell phones have become ubiquitous across the continent. Although the debate on cell phones, information communications technology (ICT), and armed conflict generally centers on their effects on state building or conflict prevention, less discussed is the role of cell phones used by non-state groups to perpetrate organized political violence. To further explore this topic, we use new data on cell infrastructure in northern Nigeria and event data on violence attributed to Boko Haram to examine this relationship.

A study by Jan Pierskalla and Florian Hollenbach address the effect of cell phone coverage on political violence. By relying primarily on the Uniform Collateral Data Portal Georeferenced Event Dataset, the authors reveal a statistically significant effect concerning cell phone coverage and the incidence of violence in Africa. Cell phone coverage, according to the authors, played an instrumental role in overcoming collective action and coordination challenges that led to increased levels of organized political violence in Africa.

Another view asserts the effect of cell phones on organized political violence cannot and should not be viewed in isolation from the presence of other communication technologies. According to this view, mass communication technologies facilitate vertical linkages between state and society. This has resulted in more direct control between state and society over the flow of ideas.

In contrast, social communication technology facilitates horizontal linkages between members of society and the weakening the hierarchical control of ideas, which allows for divisive messages to compete. The opportunity for spreading divisive, sectarian calls for mobilization is especially bad in areas where other mediums of mass media are poorly accessed or absent altogether.

Cell phones and ICT can also play an important role in carrying out insurgency campaigns. Boko Haram rely on ICT and cell phones in particular as an integral logistical tool in aiding their operations, and specifically to communicate council messages and to coordinating attacks. Since the group’s violent uprising in July 2009, it has killed more than 25,000 people and has displaced 2.5 million more. We collected crowd-sourced data on reported cellular infrastructure (towers and small-cell infrastructure), and event data on violent events and terrorist attacks attributed to Boko Haram. With it we provide time-series data on the temporal distribution of Boko Haram’s violent behaviors related to the level of cell infrastructure reported in Nigeria since October 2008, when crowd-sourcing efforts began. 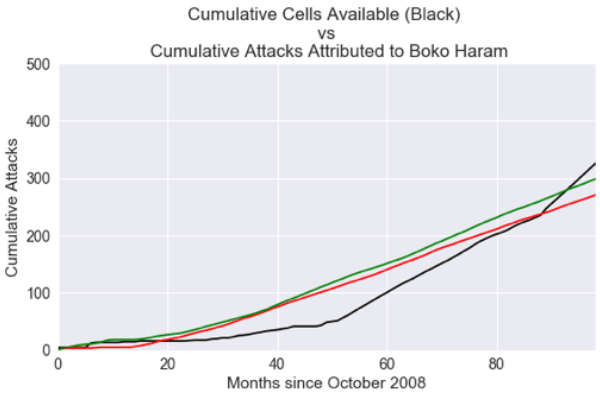 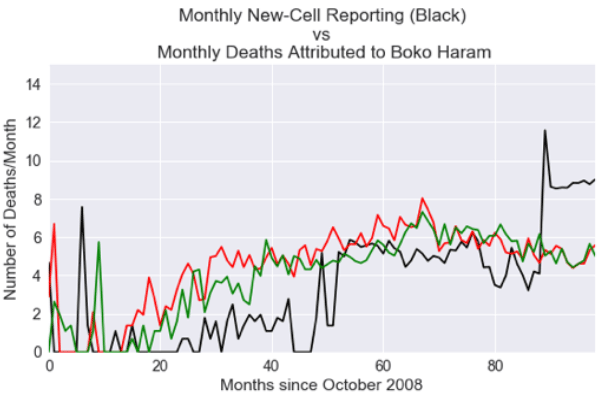 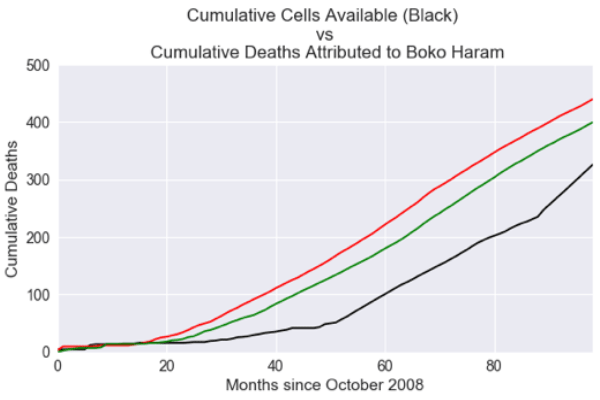 While the trends displayed in figure 1 are certainly interesting, the number of attacks conducted by a group only tells part of the story. If cellular technology is helping Boko Harm to wage a better insurgency, looking at deaths attributed to the group may provide more insight into how this infrastructure makes their behaviors deadlier through easier coordination and planning. In figure 2, monthly and cumulative cell reports are tracked with both the number of monthly deaths attributed to Boko Haram activity and the cumulative number of deaths since October 2008.

Tracking deaths with reported cell-infrastructure results in a tighter tracking when compared to measuring attacks alone. Violence by Boko Haram sees a steady increase in lethality until it begins a slight decrease after the 80-month mark; tracking with greater levels of new monthly cell reporting in the process. Looking at cumulative levels, a similar pattern when compared to attacks can be found. The main difference for deaths is magnitude. As the cumulative level of cells increases, the cumulative number of deaths attributed to Boko Haram rises sharply in parallel to this trend.  While one should remain cautious about moving from correlation to causation, the findings suggest superficial support for more robust empirical analyses and seems to corroborate more anecdotal observations that attribute the growth in cell phone usage and infrastructure as an influence on Boko Haram’s violent behaviors. Greater access to mobile cellular infrastructure may provide Boko Haram with less costly methods of communication, coordination, and information sharing. This is likely to make Nigeria’s job harder when it comes to fighting entrenched Boko Haram units and potentially levels the playing field when it comes to information diffusion among non-combatants as well.

The Nigerian state has responded with several counter-insurgency strategies, including shutting off access to ICT and cell phone services in the country’s northeast region in the period of May 23 to July 12, 2013. Interestingly, this corresponds to the 55-month marker period of attack stagnation found in Figure 1. Although as Jacob Udo-Udo Jacob and Idorenyin Akpan (2015) have demonstrated, the number of Boko Haram attacks declined during this period, fear and distrust towards the state increased among citizens, reminiscing about past military dictatorships in the country. More concerning however, the blackout of ICT services also resulted in an altering of Boko Haram’s insurgency strategy. It was after this blackout that the group’s system of organization evolved from networked and decentralized, to geographically centralized and closed. Located in the Sambisa forest, this allowed Boko Haram to become a regional security threat, increasingly relying on kidnapping of women and children for added protection.

Concluding on this point, why do we see a stagnation in attacks, but an increase in lethality? It is probable that cell-infrastructure is only one part of a complex story. Targeted interventions against Boko Haram’s cell phone usage may have increased its lethality due to the group’s movement toward a centralized organizational structure.  More concentrated unit structures may have provided Boko Haram the ability to enact less frequent, but more deadly attacks that go beyond sporadic acts of terrorism. Another theory concerns retaliation and a war of attrition strategy. In response to the government’s efforts to fragment the group, Boko Haram may have become more violent to signal their resolve against the more powerful Nigerian military. Regardless of what explains these patterns, one thing is clear: In conflicts that lack strong governmental hold on territory, the development of communication systems like cellular networks may provide developmental benefits to a population while simultaneously aiding organized challengers of state authority.