The 2015 winner of the Nobel Peace prize, the Tunisian Dialogue Quartet, represents a first in the history of the Nobel Committee. 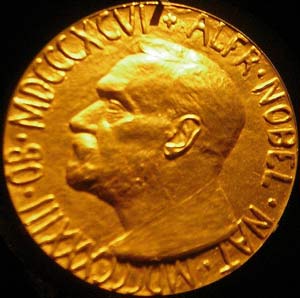 To be clear, organizations have won the award before. The International Campaign to Ban Landmines won in 1997. Recently, the European Union won in 2012. The International Red Cross won three times in 1917, 1944, and 1963. But, never before has the award been granted to a collection of civil society organizations that otherwise had differing missions and goals, but coalesced to support a shared goal and to solve a particular problem. This distinction is important. World-wide, non-state actors are playing essential roles in supporting positive outcomes for peace and security. It is frequently true that when non-state actors coordinate and collaborate with other private or public sector organizations, the result is powerful. Multi-stakeholder collaboration is proving to be one of most effective solutions to challenges posed to international peace and security. 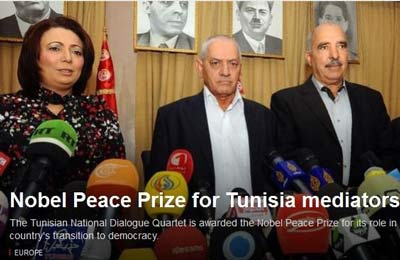 The Dialogue Quartet serves as a prime example of multi-stakeholder collaboration because they are a consortium of four national organizations: the Tunisian General Labor Union, the Tunisian Confederation of Industry, Trades, and Handicrafts, the Tunisian Human Rights League, and the Tunisian Order of Lawyers. These organizations spanned the private and public sector and subsequently brought together people from different backgrounds and perspectives committed to a common cause – to secure peace and democratic governance in Tunisia. They emerged at a critical moment in the Tunisian story of the Arab Spring. The assassination of opposition party leaders and mass protests against the newly elected regime threatened the fragile democratic governance put in place after the fall of dictator Ben Ali.

Similar to previous civil society interventions in different contexts, the Quartet’s success in Tunisia reflects a new reality in approaches to peace and security. In 2013, the political situation in Tunisia was bleak. The Dialogue Quartet was able to quickly organize and intervene during the moment of political instability. They are credited for convincing the ruling Ennahda Party to step down, assisting in the transition to an interim government, and supporting a renewed constitution drafting process by overseeing the process which ratified a new constitution in January of 2014. Likewise, the Quartet supported the national elections, peacefully and successfully held in October and November of 2014. Some suggest that time was ripe for the Quartet’s success, especially when compared to the political outcomes in Egypt. Witnessing the Muslim Brotherhood’s ultimate defeat, the Ennahda Party, also self-defined as an Islamic political party, may have feared a similar fate had they refused to step down from power. Others point to characteristics unique to Tunisia, namely a military that exerted less influence over the political process. 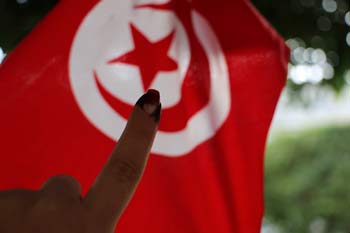 This is not to suggest a wholly rosy picture in Tunisia. Earlier this year, extremist violence targeting tourists in Tunis and nearby Sousse shocked the world and devastated the local tourism industry. Serious security concerns exist, especially along the border with Libya between which terrorist groups reportedly move. Broadly speaking, evidence suggests that young democracies are volatile, more susceptible to extreme violence and at greater risk of civil war.

But based on what we have observed from similar cases, there is optimism for Tunisia. Some may recall the political violence that occurred after the 2007 presidential election in Kenya. The crises erupted after incumbent President Mwai Kibaki was declared the winner but supporters of the opposing candidate Raila Odinga alleged electoral fraud. The following months saw estimates of 800-1,500 killed and scores more displaced by violence.  In the run-up to the 2013 Kenyan Presidential election, many feared the resumption or escalation of post-election violence. Yet, the 2013 elections proved to be the most peaceful in Kenyan history. 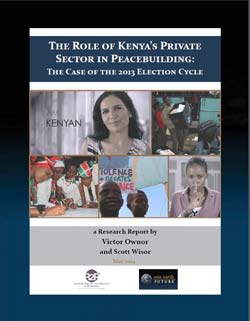 What changed in the span of six years? The mobilization of Kenya’s private sector to prevent election-based violence partnered with constitutional reforms achieved during that time period. Research conducted in Kenya from October 2013-January 2014 reveals that the Kenyan private sector built an effective peacebuilding campaign that contributed to peaceful elections. This included businesses blocking hate messages sent through mobile phones, promoting a public awareness campaign supporting peace, sponsoring presidential debates, and proposing insurance coverage for acts of political violence. This solution shares similarities with what happened in Tunisia. The intervention of civil society organizations during a time of extreme political instability paired with changes to the constitution.

Of course, there is no way to know that the Quartet’s work will guarantee long-term peace and stability in Tunisia. Other than the Kenyan case study and a few others, there’s not much research that speaks to coordinated activity among civil society organizations. Deadly blasts in Turkey at a peace rally over the weekend stands as a macabre reminder that spoilers are a threat and pose the potential to derail progress. Unforeseen events can have unforeseen consequences.

The hope is that Tunisia can continue to build on its commitment to peace, democratic processes, and focus on improving its state capacity in order to more effectively address threats to their internal security. Perhaps the Nobel Peace prize will serve as an inspiration towards these goals and will galvanize continued work from the Quartet. This award offers optimism not just for Tunisia but for civil society world-wide: coordination and collaboration does matter and can profoundly change outcomes for peace.